H.G. Dr. Thomas Mar Makarios was born on 26th May 1926 to Mr Chacko and Mrs Mariamma Kuttikandathil in Kerala, South India. Born to a staunch Indian Orthodox family, H.G was not the only member of his family who dedicated their lives to serve our Lord. HG’s siblings too received the same calling. HG’s two of the brothers are serving as Monks and the other a serving Cor-Episcopa. H.G’s sister too dedicated her life to ministry and became a nun at the Bethany Convent in India.

H.G studied in various religious institutions in England, Germany, Switzerland and France. H.G has been in the United States of America since 1963 and earned a Bachelor of Divinity degree from Nashotah House in Wisconsin. H.G returned back to India in 1975 and worked as a professor of Church History at the Orthodox Theological Seminary in Kottayam, India.

H.G served as an acolyte at the Old Seminary Chapel and soon after was ordained as a Deacon on February 23 in the year 1952. 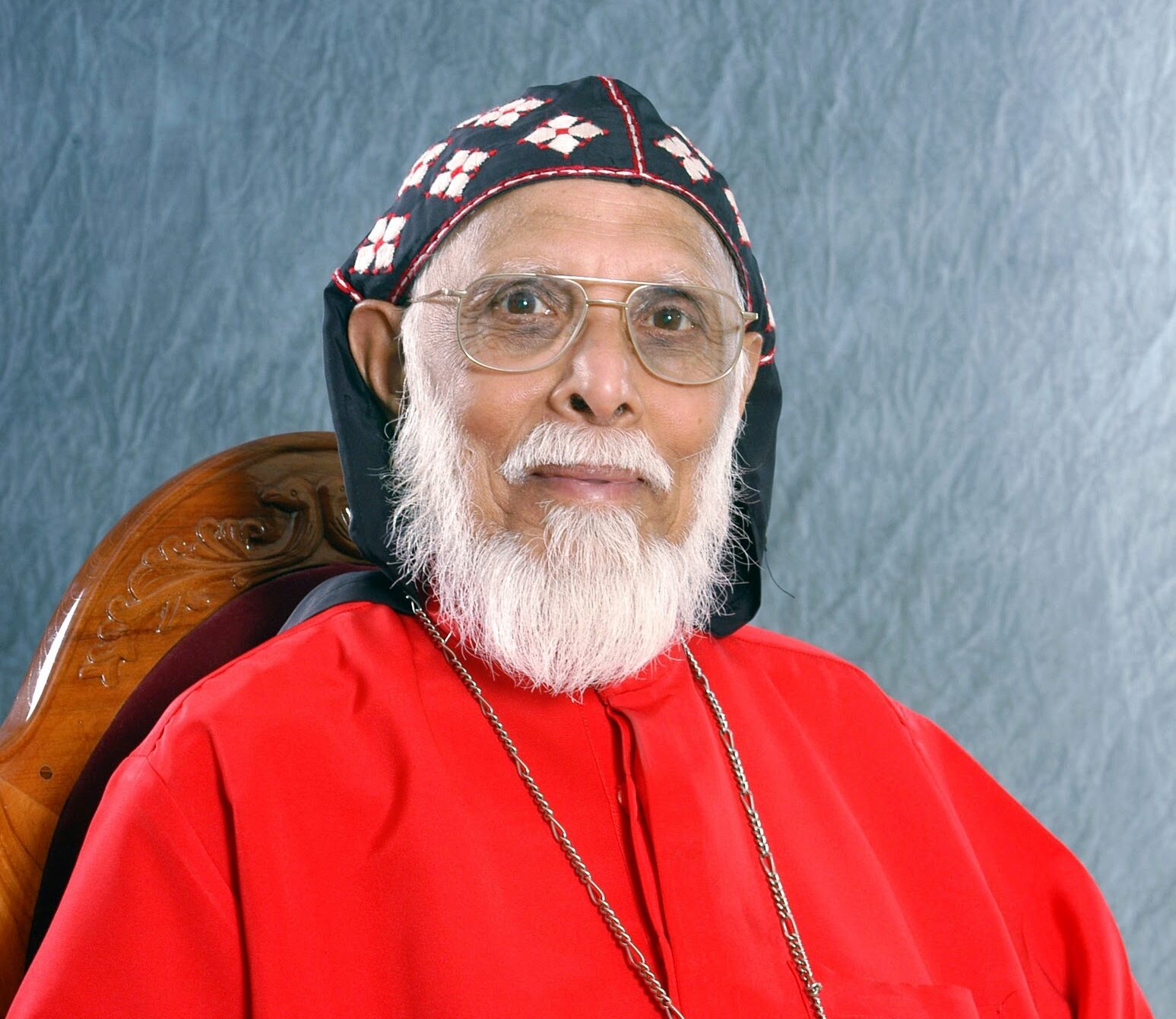 H.G was later ordained as a Priest in September of 1952 in Madras at the Saint Thomas Orthodox Cathedral by His Holiness Moran Mar Baselios Mar Thoma Geevarghese I Catholicos of the Apostolic Throne of St Thomas and Malankara Metropolitan.

Since 1985, whilst holding office as Metropolitan of the American Diocese, H.G began teaching religion at Alma College in Michigan and for many years H.G continued teaching as a visiting professor. In recognition of LL His Grace Dr. Thomas Mar Makarios’s achievements and contributions to church and society, Alma College awarded him the degree of Doctor of Divinity Honoris Causa in the year 1990.

In the year 1994 LL His Grace Dr Thomas Mar Makarios was enthroned as the first Metropolitan of the newly formed Diocese of Canada, UK & Europe.

H.G visited SMIOC and celebrated Holy Communion on many occasions since our congregation took its form in 2002. On 29th August 2003 with the blessings and prayer of LL His Grace Dr Thomas Mar Makarios Metropolitan, Diocese of Canada, UK & Europe, H.G decreed our gathering of members from a congregation to a church and declared our Church as St Marys’ Indian Orthodox Church, Bristol.

On 30th December 2006, LL His Grace Dr Thomas Mar Makarios graced our annual family programme of the church (Family Get-together). At this programme, H.G addressed a very solemn and poignant message to us all at Whitehall Southmead, Bristol. The message was primarily about love and compassion which warmed our hearts. H.G spoke at length and quoted the love and prayers of H.G’s mother and the influence she was in H.G’s life. This message was recorded amongst all the programme of the said night. To date an excerpt of that heartfelt and teary message from H.G is widely heard and watched. This message will always remain in our minds as it reflects an inspiration and spiritual guidance to us and to all who views it.

In December 2007 during H.G’s arch pastoral visit to his flock in the United Kingdom, we were honoured to have H.G visit us and celebrate the Holy Advent Service in the evening of 24th December at St Vincent De-Paul Catholic Church, Southmead Bristol. On the following Christmas Day, the 25th December 2007, H.G chaired a Church Committee Meeting of our church at the Marriott Hotel, Bristol. It was truly a memorable and cherished meeting for all who attended.

H.G has instilled in us the importance of being together with the bond of love and working hard in a foreign land. H.G had thought us to aspire for the goal of owning a church one day for ourselves. This filled inspiration and aspiration in our hearts since then bore its fruit in later years when we achieved the dream of our very own place of worship in September 2013.

In late January of 2008 during H.G’s tour of duty to the churches in the North of England, LL His Grace Dr Thomas Mar Makarios met with an unfortunate motor vehicle accident in Newcastle Upon-Tyne. H.G was hospitalised with serious injuries for many weeks. In the morning of 23rd February 2008 at 1100 hours GMT, H.G drew his last breath and left us to our Lord’s heavenly abode. The mortal remains of our beloved Metropolitan LL His Grace Dr Thomas Mar Makarios were flown to Kerala India. His Grace lay interred at the Malankara (Indian) Orthodox Syrian Church, Catholicate Palace, Kottayam, India. The dedication shown by H.G as a spiritual father to his flock over the years has paved the way for us to be strong and resilient. Every year on 23rd February we continue to commemorate the death anniversary of our patron bishop LL H.G Dr Thomas Mar Makarios and perform special prayers during Holy Communion for H.G to continue to rest in peace at the bosom of Abraham, Isaac and Jacob. May H.G’s eternal memory be upon us and upon our future generation of this beloved Church of ours.