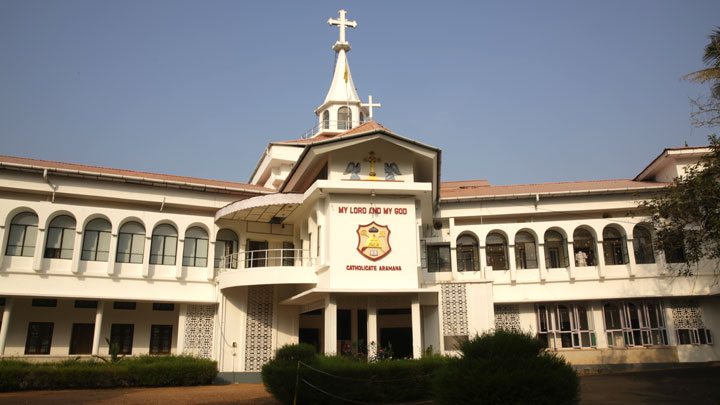 The Indian Orthodox Syrian Church was founded by St. Thomas, one of the twelve apostles of Jesus Christ, who came to India in A.D. 52.

From the fourth century...

the Indian Church entered into a close relationship with the Persian or East Syrian Church. From the Persians, the Indians inherited The East Syrian language and liturgies and gradually came to be known as ‘Syrian Christians’. In the sixteenth century, Roman Catholic missionaries came to Kerala. They tried to merge the Syrian Christians to the Roman Catholic Church and this led to a split in the community. Those who accepted Roman Catholicism are the present Syro-Malabar Catholics. Later, Western Protestant missionaries came to Kerala and worked among the Syrian Christians. This also created certain divisions in the community. In the seventeenth century, the Church came into relationship with the Antiochene Church, which again caused splits. As a result of this relationship, the Church received West Syrian liturgies and practices. The Church entered into a new phase of its history by the establishment of the Catholicate in 1912.

Throughout centuries the Metropolitan heads of the Thomas Christians were known as the apostolic successors of St.Thomas, the founder of the Indian church.

In St. Mathew 19:28 it is written that “Jesus said to them: Amen, I say to you, you who have followed me, when the Son of Man is seated on the throne of his glory in the rebirth, you yourselves shall also sit upon twelve thrones ruling the twelve tribes of Israel”.

In Luke 22:28 our Lord says to the twelve “You are those who have continued with me in trials. As my father appointed a Kingdom for me, so do I appoint for you that you may eat and drink at my table in my Kingdom, and sit on thrones judging the twelve tribes of Israel”.

From these two passages, it is quite clear that our Lord has promised twelve thrones to the twelve apostles and none of them was deprived of having the authority. The church always asserted that St. Thomas had his apostolic throne in India. When the Catholicate was established the ‘Catholicose’ as the head of the Malankara church, took the title “The successor of the Apostolic throne of St. Thomas”.

At present, the Church is using the West Syrian liturgy. The faith of the Church was established by the three Ecumenical Councils of Nicea (A.D. 325), Constantinople (A.D. 381) and Ephesus (A.D. 431).

This Church now consists of about 2.5 million members, who are spread all over the world, though the majority reside in the state of Kerala in South-West India. The Supreme Head of the Church and the present Catholicos is H.H. Baselios Mar Thoma Paulose II. H.H: s residence and the Head-quarters of the Church is the ‘Catholicate Palace’ situated in Kottayam in the Kerala State of South-West India. The Church as a whole is divided into 30 ecclesial units called dioceses and each diocese is served by a bishop, administratively and spiritually.