The historical journey of the birth of our church in Bristol begins by the dawn of the 21st century wherein the early years of the millennium saw the migration of nurses into the United Kingdom from the countries of the Gulf, India and other parts of the world. These nurses and health professionals arrived and settled in their new home in a new country around Bristol and the surrounding areas.

Upon our arrival and settling down in Bristol, we then begin to seek a place to worship. As Christians, it was our ultimate spiritual need to participate in Sunday worship at an Indian Orthodox Church where possible. This search resulted in accepting the fact that we needed to travel to the only and nearest Indian Orthodox Church congregation of worshippers which was in London. It was a journey about 120 miles away to St Andrew's by the Wardrobe Church in Blackfriars, London.

After about two years of travelling, we came to terms that this journey from Bristol to London for worship was overwhelming and at times not practical especially travelling with our young children. 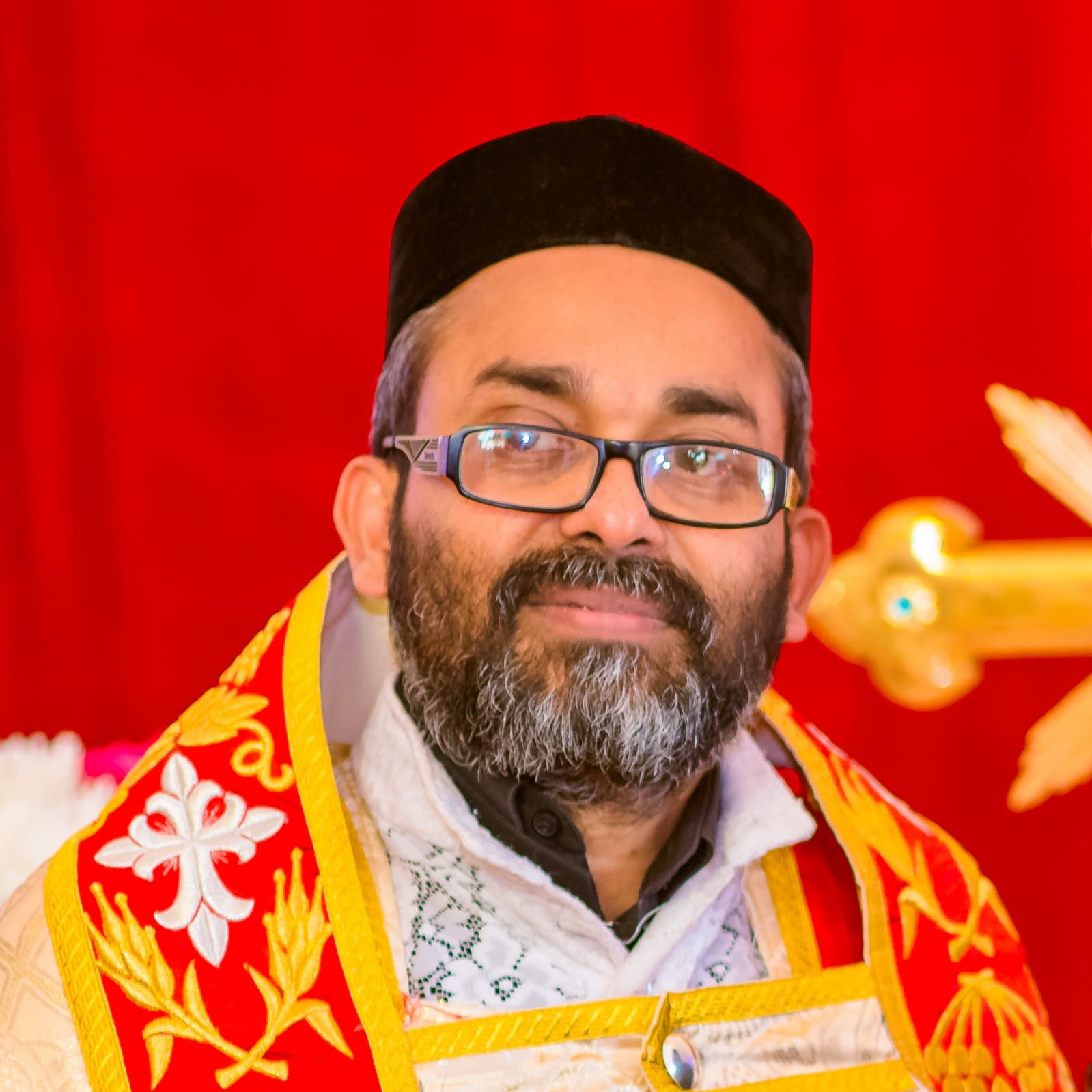 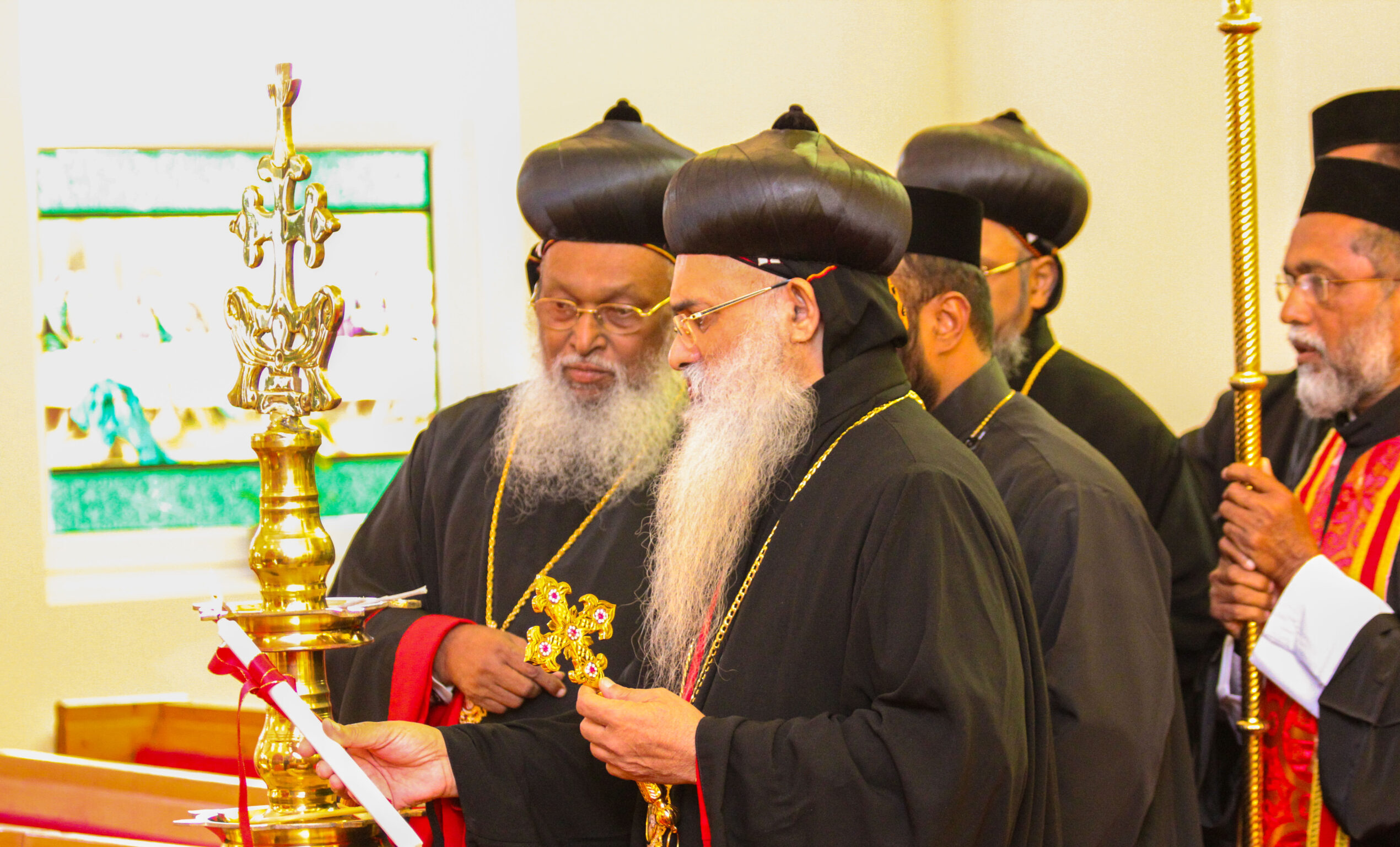 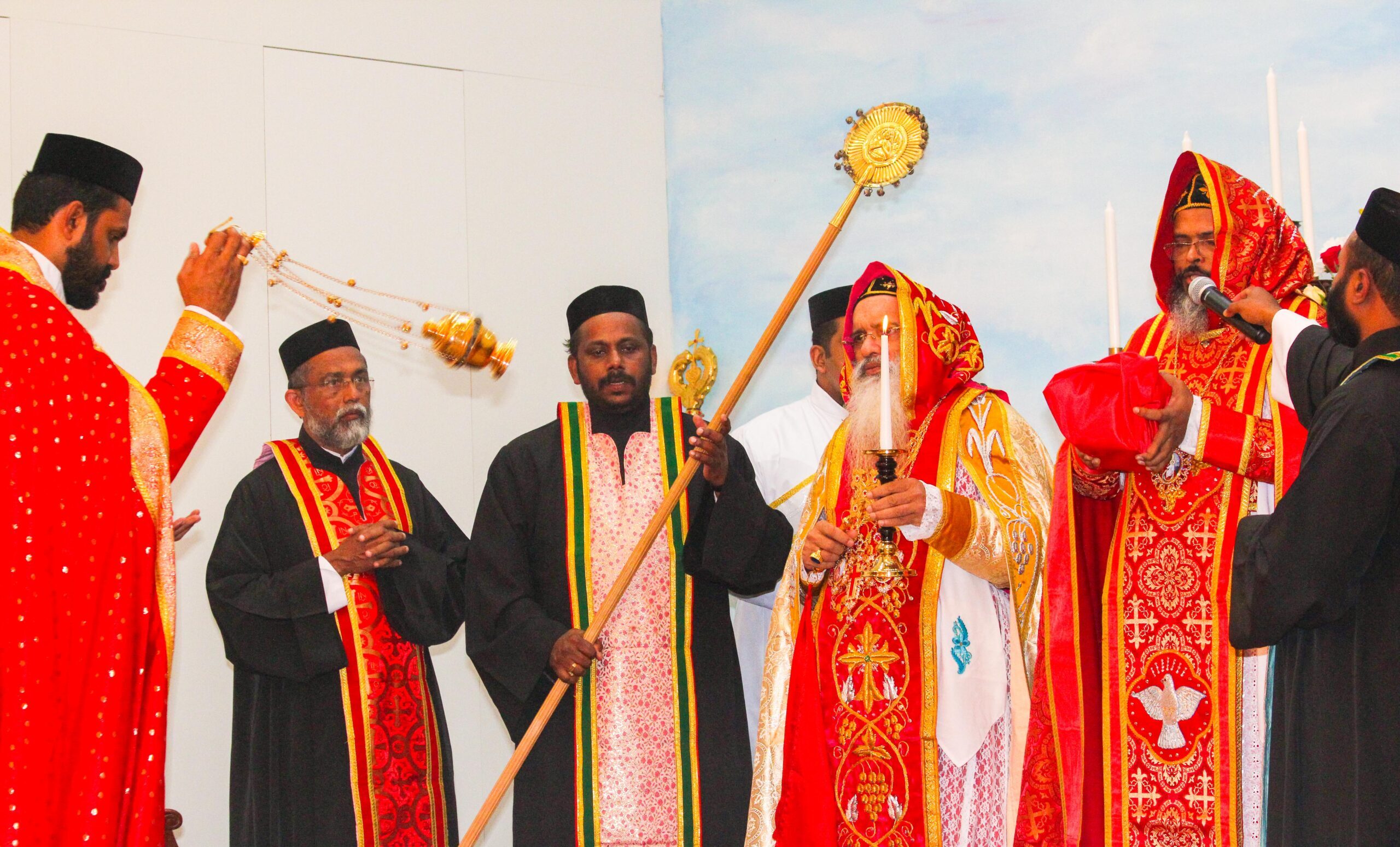 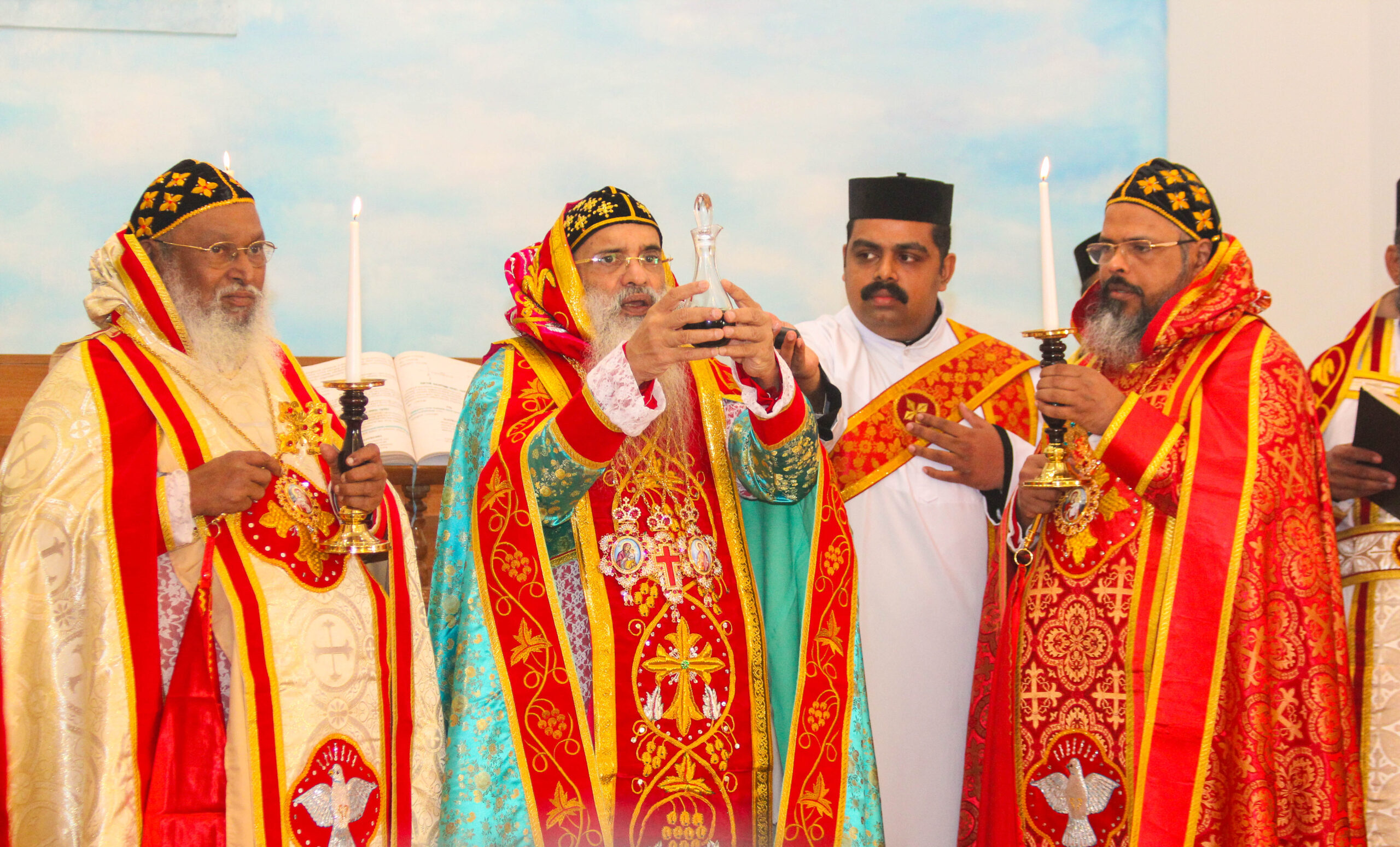 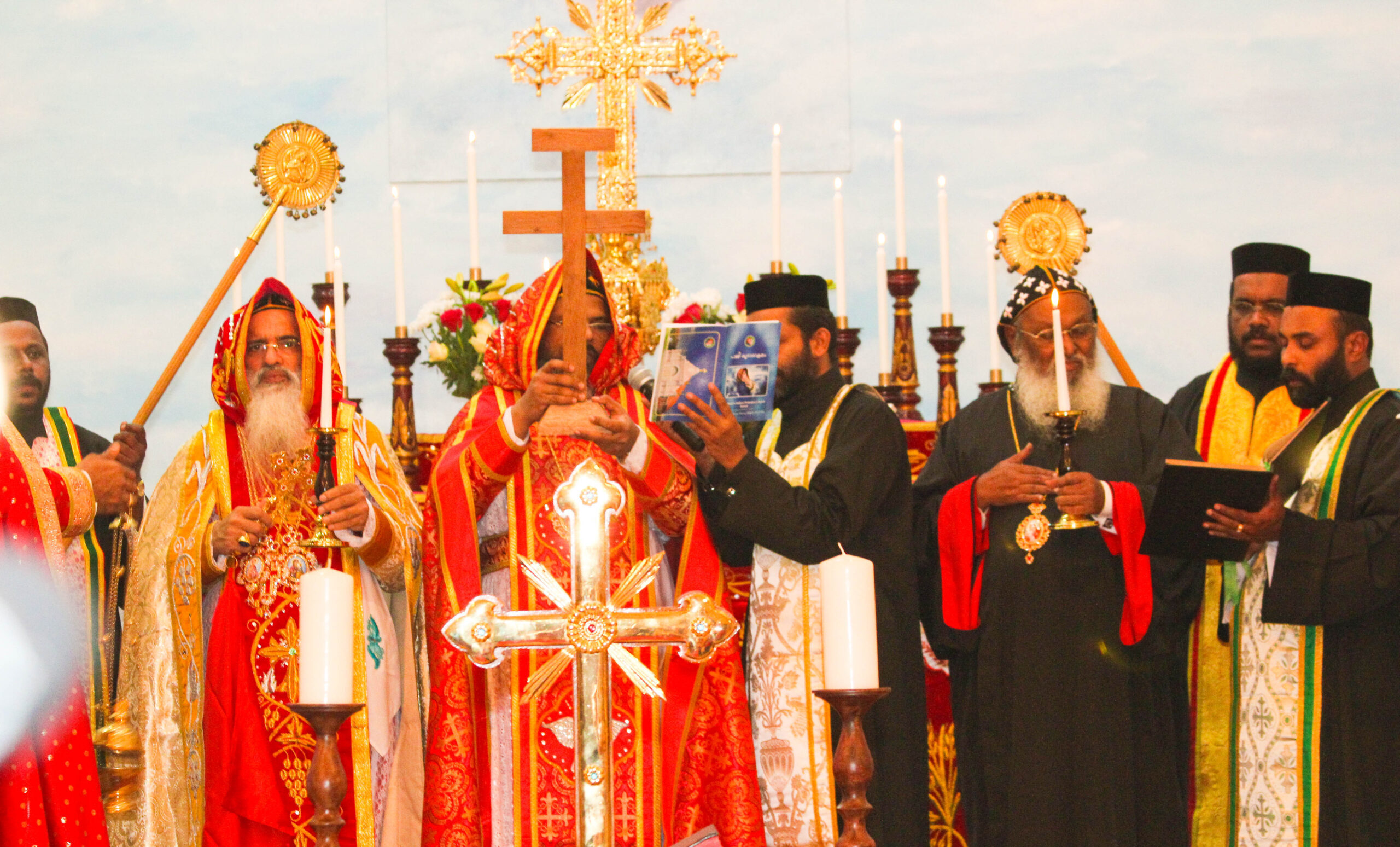 Read More About Our History...

Our small flock of worshippers then met in August 2002 and conducted family gatherings for prayer meetings in the homes of those in Bristol. We met as a group once every month on a Friday evening. Our steadfast faith endorsed us to sing Christian hymns, read the bible and recite the evening prayers. This continued zealously until October 2002. During these times where it was within our means, we were still attending the church services in London.

In October 2002, the late Mrs Alice George, a member of the London parish became aware of our commitment and dedication. She and several members in Bristol arranged for the then Vicar of the London parish, Fr. Abraham Thomas (Aby Achen) to conduct evening prayers and Holy Communion in Bristol for the first time. This initiative from Mrs Alice George and the spiritual assistance from Fr. Abraham Thomas (Aby Achen) is pivotal to the history of the commencement of our very own evening prayers and Holy Communion service in Bristol.

In 2003, from the 13th to the 20th of April 2003, we observed the first holy week. The prayers were performed by Fr. Abraham George (Joy Achen). We rented a hall to conduct the said prayers and services for the week. By the middle of 2003 worshipper’s spiritual needs became more pronounced and we recognised that it was necessary for us to formally exist as a congregation/parish in Bristol. We pursued this dream and soon it became a reality when our Diocese Bishop then, Late Lamented His Grace Dr Thomas Mar Makarios Metropolitan of the Diocese of UK, Europe and Canada made his maiden visit to us in August 2003.

His Grace led the Holy Communion service on 29th August 2003 with the presence of Fr Abraham Thomas (Aby Achen) from the London church and with a newly arrived priest from India of the Chengannur Diocese, Fr. Varghese T. Mathew. Later His Grace convened our first Church General Meeting. In the general meeting, His Grace Dr Thomas Mar Makarios proclaimed the Bristol congregation to a parish of the Malankara Orthodox Syrian Church and under the Diocese of North America and UK, Europe and Canada. Our congregation was christened as a parish with the name, St Mary’s Indian Orthodox Church Bristol. His Grace also appointed Rev. Fr Varghese T. Mathew as the first Vicar of our church. The general meeting attendees adopted the ad-hoc committee that was administering the church affairs then as the first Church Committee Members. They were, Secretary: – Mr Sunny Paulose. Treasurer: – Mr V.V. Joseph. Committee Members: – Mr Dennis Daniel, Mr Raju George, Mr Thankachan John, Mr V. O Jose, Dr Benny Thomas and Mr Naisent Jacob.

Since the proclamation, the church membership began to grow. Our members spanned from in and around the South West and Wales. The subsequent step we took was to ensure a permanent place for worship every second Saturday of the month. We approached the Catholic Church in Southmead, the St Vincent De-Paul Catholic Church. The generosity of the Catholic Bishop then, His Excellency Bishop Declan Lang and the Vicar of the St Vincent De Paul, Fr George Batten allowed us to worship in their church on every second Saturday of the month. Shortly after several years, we arranged for the fourth Saturday in the month as another day to participate in the Holy Communion service. It must be recorded as we pen down about our journey through the history of our church, our sincere gratitude was shown to us by the Catholic Church of Southmead for enabling a place for worship at their parish for more than ten years.

In 2007 the members in their respective area of residents gathered in their homes and formed cottage prayer groups to maintain their spiritual needs since we were spread around the whole of the South West. In the same year, along with the prayer group in Bristol on every second and fourth Friday, we also formed prayer groups in Reading and Exeter & Plymouth.

Even though we had a place to worship and perform the Holy Communion service on these two Saturdays in a month, the church venue was not possible for us to perform the holy week prayers each year as the church we rented was occupied by their own worshippers. This prompted us to use halls to conduct our holy week prayers. During these times it had always been in our hearts and minds that we should be looking out for a place of worship of our own. We took on the task and endeavoured to seek this venue. In 2010 we started the search and viewed several venues and plots around Southmead and throughout the city area of Bristol. As we all know the phrase that says, “Our plans may not always be God’s plan”. These searches in the above-mentioned areas were in vain but faith in our Lord did not diminish. His ultimate plan for where His house of worship is to be erected was at Pilning.

In the year 2011, we were drawn to the vacant St Peter’s School in Pilning, Easter Compton. It was up for sale and we decided to purchase the vacant school and the land available to us. The keys to the property were handed to us on the 18th of August 2011. We noted the fact as it was a school we needed to reconstruct it into a church. On 30th June 2012, the foundation stone of our church was laid by His Grace Dr Mathews Mar Thimothios Metropolitan of the Diocese of UK, Europe & Africa. Reconstruction work changing it from the school to a church began in the same year.

In 2013 our dreams and hard work started to bear their fruits when the final pieces to the “jigsaw puzzle” began to fall into place and the Church was taking its shape from a school at 1b Bank Road, Pilning, Bristol BS35 4JG. By late August 2013, the St. Marys’ Indian Orthodox Church Bristol was ready for its consecration.

On 6th and 7th September 2013, our church was consecrated by the Supreme Head of the Malankara (Indian) Orthodox Syrian Church, His Holiness Moran Mar Baselios Mar Thoma Paulose II, Catholicos of the Apostolic Throne of St. Thomas and Malankara Metropolitan. His Holiness was assisted by one of the senior bishops of our Church, Late Lamented His Grace Thomas Mar Athanasios Metropolitan, Diocese of Chengannur and our diocese bishop, His Grace Dr Mathews Mar Thimothios Metropolitan, Diocese of UK, Europe & Africa.

With the new church in our midst, we conducted church services every Sunday, on all festival and feast days of our Lord and of the Saints of our church. Our weekday services, prayers, programs and church activities were able to be organised at this new church premises.

When the church was consecrated in 2013 we had a membership of around 95 families. In the same year, our brothers and sisters in Christ who were with us from Wales opted to form a congregation of their own as it was more feasible for them due to the distance that they had to travel to come and worship with us in this church at Bristol. Ensuing this, the church continued to grow in its membership and in strength. Migrants of health professional backgrounds and of other career fields from around the world continued to arrive in and around Bristol.

Looking back at our journey from where we were and to where we are today, as worshippers of St Marys Indian Orthodox Bristol, we humbly accept the blessings of our Lord who has given us the wisdom and ability to be able to erect His house of worship and a place for us to meet and pray on every Sunday and on all other occasions.

With the prayers of our patron saint, St Mary the Theotokos, may our journey forward through the history of our church not end here but continue to light the path of all faithful who come forth to worship at this house of the Lord.